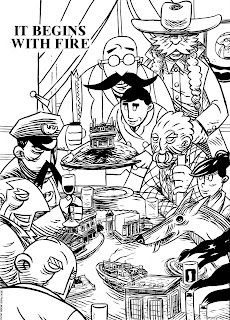 Cooking along on a big Tug zine for prospect 1.5 that's going to be going on in September here in NOLA. It's great that despite the scarcity of a lively art scene in many southern cities New Orleans maintains large events and tons of galleries.

The image up top is the cover page for the new zine, it's based off of Norman Rockwell's painting Freedom From Want. Of course the plates and food have been changed to the town, Whitworth's mansion, the hooverville, and the factories. The drawing also depicts the social and economic hierarchy, with the bosses and police at the top and the workers at the bottom. It's the most conceptual drawing I've done in a while. I know going to say, "But Ben, Freedom From Want was painted in forty three, that's ten years after your story. Rockwell started painting professionally well before the 20's and his subjects have always depicted romanticizations of american life, so it still seems appropriate to spin of his visual themes.
Something I'd always wished I touched on was the disparity between the depiction of america in entertainment and the harsh reality during that time. Maybe it's not too late.
Posted by Ben Passmore at 1:29 PM

Nice cover
Quite a family you got at that table.

The Manson family might have been more well adjusted.

I so want to get a copy!