Hey ya’ll I’m a super space cadet (fuck that, I’d never join the army. It’s the flat feet you see.), and I only now realized that I needed to update the tour dates and announce some stuff. So the buggy is that I’m not gonna be able to roll through Texas (Austin and Houston specifically), I tried I really did. The problem is my waining punk street cred and the hard fact that comics don’t seem much like a crowd draw. I guess I can’t argue with that.
Atlanta was also a bust, but it’s not for lack of leaving my year’s quota of awkward phone messages.
Here is the final, 100% non-changing tour schedule. If I end up having an impromptu show or something I’ll post it on here, but between The Hobbit (don’t you dare judge me.) and finding all those pralines I buried in Savannah’s numerous parks, it seems sorta unlikely.
Dec.12th-New Orleans,LA@7:30pmFairgrinds (yo this’ll be Luka and my book release, and we’ll have a bunch over other authors and a space bag, so come!)
Dec.14th-Pensacola,FL@7pm Open Books (we’re gonna hang at the Food Not Bombs and hour before up the road and you should too!)
Dec.15th-Athens,GA@6pmFlicker theatre
Dec.17th-Savannah,GA@8pm The Sentient Bean (This is my old hometown, I may crawl into a bottle and stay there.)
Dec18th-Chapel Hill,NC@7pm Internationalist Books
Dec19-Boone,NC (the dang town all day, new kid din this is the only date I’m sketchy on and )
Dec 20th-Asheville,NC@7:30 Firestorm Cafe and Books
Dec21st-Memphis, TN@Java Cabana
okay, you guys are awesome, especially Alien-e for reminding me.
Posted by Ben Passmore at 11:52 PM 1 comment:

YO YO YO
So as you know I'm going on a book reading tour with two other crazy folks (raging sci-fi luminary Elwin Cotman and somber poet of mystery Luka Miro) and my flashy full-color first is of DAYGLOAYHOLE!!! I sold enough hot car stereos to pay for printing but I could use some cash to help with travel. The team of rabid nutria aren't going to feed themselves, well I guess I should say that they'll eat me if I don't shove pork sausage down their throats every half-hour (INNUENDO!!!). So I'm spanging the internetz! If you can spare some extra cash and love me deeply our just want some hot-ass premiums for donating (listen to me sounding all technical, there goes that very last thread of punknezz!) holler at our kickstarter!
Also, you should let me know if you wanna a copy of DAYGLOAYHOLE Issuer one: IT'S ALL OVER! 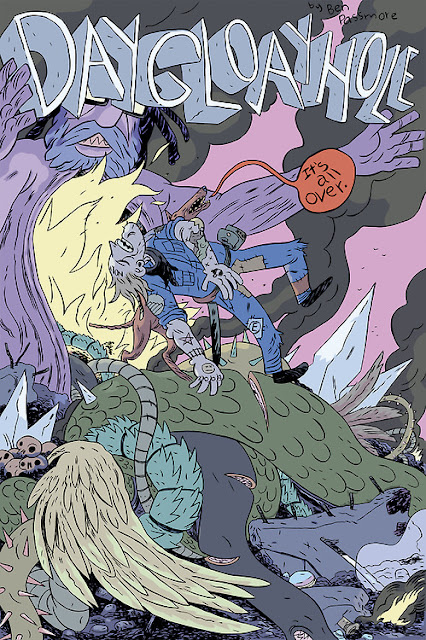 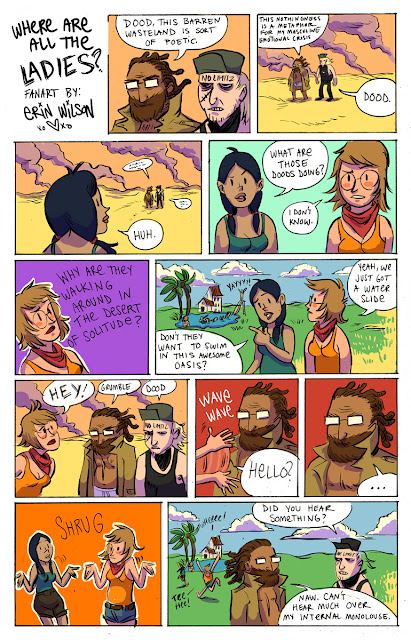 fantastic DAYGLOAYHOLE fan-art by Erin Wilson
This is going to a place of prominence in the first DAYGLOAYHOLE book Dec. 9th.
You too could be in the comic as well if you send me fan-art comics, illustrations, or fiction by Nov. 15th to nuulow@gmail.com.

So on some realness, I don't post here much anymore. There's no big reason besides that all my friends are doing it and like a bridge or a cliff I must tumble on after those few sacred relations. "Sacred relations" is what I'm calling sex from now on, I've just decided. The good news is that, if you so desire, you can follow me into this new endeavor.

So I hope this wasn't rough on you, changes in relationships are always hard or at least that's what my therapist says. To my machine. Every week. We she's asking for the money I owe. To the Snake King.

Posted by Ben Passmore at 9:09 AM No comments: 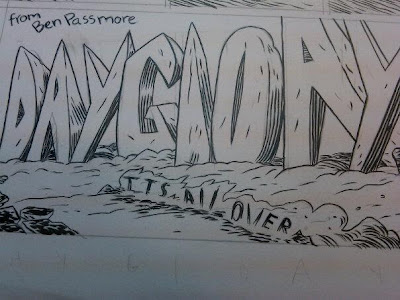 In the past writer’s of  comics have have deemed pet names to there fans large and small. Many times I’ve considered what to call the readers of DAYGLOAYHOLE. Often I lead my messages with” folks” or “friends,” and while this type of familiar language would be the linguistic equivalent to rimming in the lexicon of Western Massachusetts residents (my homeland), it fails to convey my specific affection for the sacred ones patient enough to read my florescent scrawlings. I think we all play the “what do you call a group of ______?”  game. A group of bikers is a peliton. A gaggle a, group of geese not in flight. A murder is a group of flying crows (also what I use to refer to a group of cops, in flight or just waddling around.).
Stan Lee referred to the fans of Marvels once sinking crew of titles as “true-believers” and it’s sort of a near perfect term. “True-believers” expresses almost in total a cartoonists feelings toward the people that read their work and enjoy it. Like many things made by Stan Lee, Alt. types making snarky indie comics have used his term of endearment ironically ,and as a man resting well in the pocket of the snarky, alienated, disingenuous comic stereotype, I have often been tempted to call you “true-believers.” The phrase is over used though, just like everything Stan “The Man” Lee has done. Can he just stop being in movie cameos, I just expect it now. In 20 years I bet we’ll see his dead body being puppet by string waving to the camera and throwing thumbs up to Spiderman, The Fantastic Four, or (please oh please) the team of black hate that is Venom and Ghost rider.
So now I’m left to think of something original, which is a mine field for me. Since “AHOLE” is in the title my first thoughts for group names are all rectal. I’m googling for what a group of assholes is, I assume it’s another word to be used for cops. So I guess I’m looking for suggestions, and until I figure out something that matches my level of affection I will continue refer to ya’ll as friends.
This whole caffeine fueled diatribe was originally supposed to be a short blurb about two things. The first this is about DAYGLOAYHOLE fan art. If you wanna be put up on the ol DAYGLO tumblr while I’m working in Austin, TX (Oct.29 to Nov. 7th) it’d be great if you could send me what you got as a JPG by 27th to nuulow@gmail.com. So far I’ve gotten some amazing stuff and I’m totes stoked to share it with ya’ll. Comics, and other art will go in the first DAYGLOAYHOLE book coming out December 9th.  If you can’t make the 27th I’ll still post any fan art and put it in the book if you send it before Nov. 15th.
The second thing is that I’m booking a southern area book tour!!! With me will be sci-fi writer Elwin Cotman and poet Luka Miro. We’re still figuring out the dates, but we have a pretty good list of the cities we want to go to. New Orleans (duh) (Event date is TBA)
Lafayette, LA (Dec. 9th)
Baton Rouge, LA
Houston, TX
Austin,TX
Memphis, TN (TBA)
Nashville, TN
Jackson, TN
Pensacola, FL
Jacksonville, FL
Savannah, GA (TBA)
Atlanta, GA
Athens,GA (TBA)
Charleston, SC
Ashville,NC(Dec. 20th)
Boone,NC (Dec. 18th)
Chapel Hill,NC (Dec. 18th)
If we’re passing through your town and you wanna help us set-up a space to read at, that would be AMAZING!
Posted by Ben Passmore at 1:23 PM No comments: 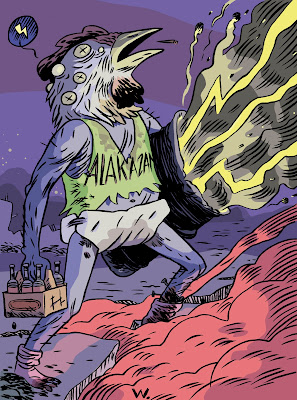 more on this later.
I post lots of comic at aygloayhole.tumblr.com
so if you feel like you don't get enough of me, look not father than there.

Posted by Ben Passmore at 6:52 PM No comments: 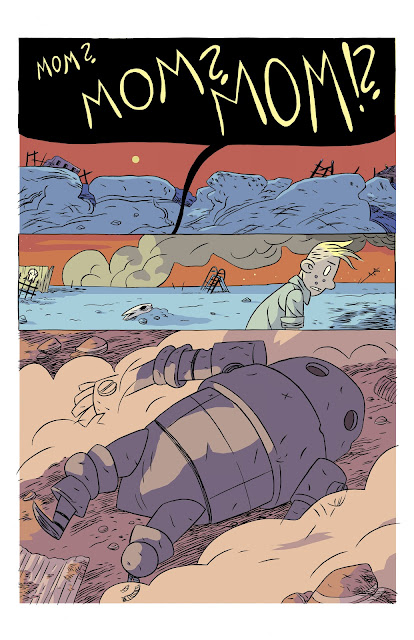 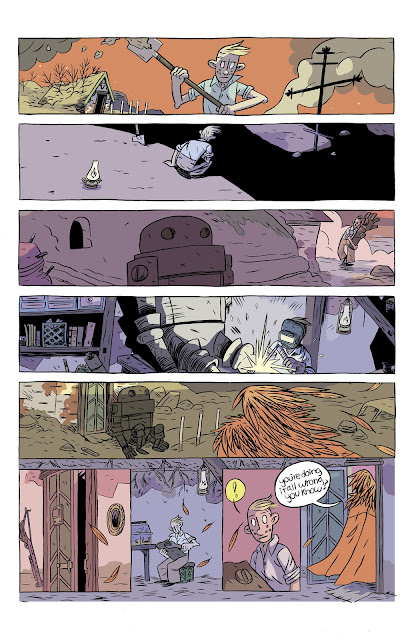 shhh, sneak peek at some comix. Written by Sam Maiden and drawn by me.

Posted by Ben Passmore at 6:50 PM No comments: 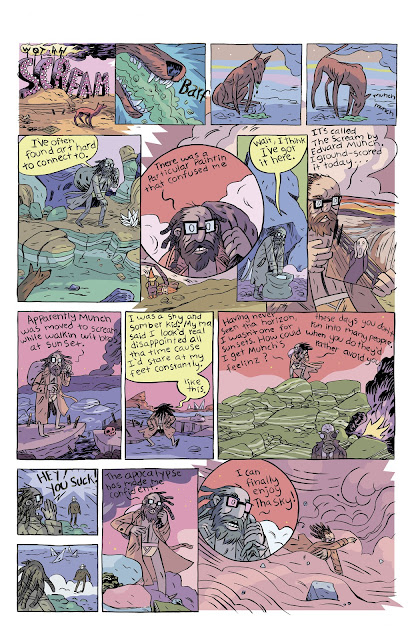 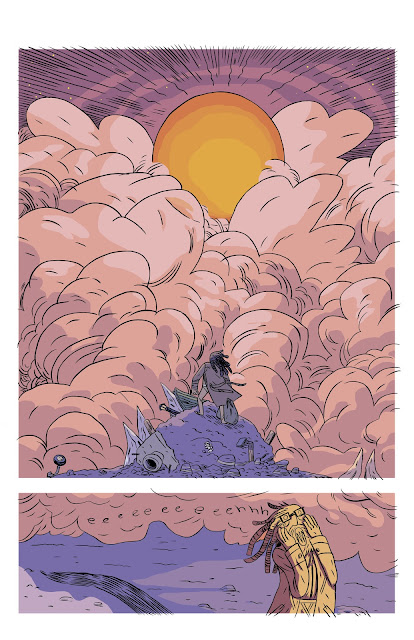 hey folks, here's a new DAYGLOAYHOLE comic!
Don't forget that you can always see some new DAYGLOhotness at it's tumblr.

Posted by Ben Passmore at 7:34 PM No comments: