Dust from the road brings out my eyes. 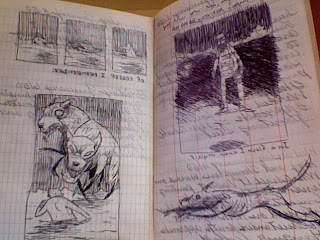 Just got back from Austin and South by Southwest and oh the stories! Too much happened to recount, but I'll try to give you an idea with a stream of conciseness bullet point list:

* Impromptu hobo rag time bands on the street.
* Opened for a big band only to have Ralph offend them deeply with itinerant finger flicking.
* Endless bonanza of dumpstering.
* Gwar
* Caught in a rain storm with my buddy under a tarp, in a puddle, and damn near naked.
* Made fast friends with two amazing bands, one being Dry River Yacht Club from Tempi.
* Blues Duo with mysterious and amazing Wisconsin guitarist.
* Got a new hat.

And this barely recounts the sheer glam and pop of the trip. It really shook the dust out and made me a new man.
I went to Austin because you need to leave paradise to remember why you moved there. New Orleans is an island danerous, dynamic, oppressive, free, and not a lick like Austin. Austin is easy and clean, it's like playing pick a number against yourself.
I needed it though. I needed to fly solo and trudge silent roads, shadowed parks, and grungy jagged streets again, eat garbage, and play good music to folks who can't tell the difference, if only for a bit.

Also I was stuck on a my book. I've been working so long on Tug, I forgot what it was to start something from nothing. It's coming together. When I was huddled under the tarp against the wind and icy rain with my buddy the story started to coming together in ernest. I'm waiting on letting anyone know what it's all about though, it'll be good, trust me. I posted a doodle I did in my sketch book.
Posted by Ben Passmore at 2:07 PM