ready freddy and the big haul 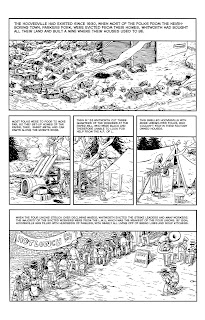 Sent twenty pages to Top Shelf for review today, very relieved to have that bench mark over with. Now we play the waiting game.
Also, I scored:
three loaves of bread (still getting over my phobia of dumpstered baked goods.)
one tomato
two squash
one head of lettuce
one apple
one lime
from a dumpster that I hit only once before and found had found nothing. I was in the neighborhood and it was raining, but I had just enough time to stuff my bag full before it really started to come down. I could have filled the back seat of a car with all the stuff in that bin.
I also scored:
bread
two zucchini
bundle of collards
from a free veggie bin downtown. In total I've got enough food for the week!
I also worked on a new page for Tug, that gives a good over view of the Hooverville.
Posted by Ben Passmore at 9:25 PM

and the page! it looks really great. you got your old font back. i like the format, goes really well especially with the depressing soup lines.