The Gospel of Tug Benson: 3am to Dewberry 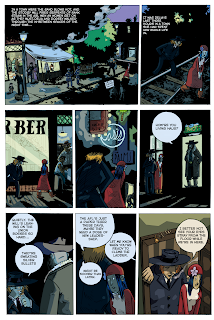 Hey party people, I'm working on a web-comic for my last quarter in school. It's a conflagration of a lot of stories I've already written fit into a story about a man in the middle of a union power struggle and a mill owner's greed. I had to write a definition of the comic and I'm pretty proud of it.


The only Web Comics creator, who consistently produces soundly researched character driven stories of alienation, turmoil, and class struggle in a composite industrial world situated between the 1870’s to the 1950’s for Neo Wobblies, Anarcho Syndicalists (better known as anarcho-communists or anarcho-collectivists), Traditional Socialists, Beat fans, Unionists, and Anti-Dispensationalists in the U.S.A, Canada, and Europe, who enjoy surveying congruencies of our nation’s disintegration under the weight of industrial avarice and individualism, both then and now, in a time when the themes of alienation, personal struggle, and classism are constantly reoccurring in new and increasingly more complex contexts.

It sounds a lot more complicated than it's going to be.