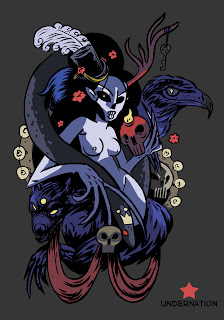 This here's a quickie I did yesterday while I was brainstorming for the new book. It's going to be markedly different than Tug, I'm not sure if that's wise or not.

So in my adventures pitching my book around I get turned down a lot. Some are wonderfully impersonal pre-formatted e-mails, "Dear (insert name) thank you for submitting (book title) but we think it's suited best for kindling." Sometimes they're special though. Sometimes the editor takes the time to lay it to you all personal like. So I got one of these on this daylight savings time day and it was so brutal I had to share it. With all names of publisher and editor removed of course.


thanks for the submission.

Not really sure what to say about it. I think your theme is interesting and if done well there is a lot of stuff that people can learn in this period, as you say. I didn't see many echoes of From Hell in there but Upton Sinclair's Jungle i can see being forewarned in these initial pages - you know it has already been adapted in a highly politicised form by New York Cartoonist Peter Kuper a few years back, right? The work also covers some of the ground that James Sturm has drawn his Graphic Novels from and going back a bit Kings in Disguise by Vance and Burr. It's fertile ground for graphic novel material.

I liked your first page quite a lot, it's well drawn and the panel progression nicely done. I presume we are seeing Whitworth's car hitting the dog so the uncaring 'mill owner' theme is set very early on. I thought the dialogue and exposition was a little laboured - maybe needs polished a bit. It's a bit pedestrian mostly and then punctuated by some odd uses of idiom I wasn't really familiar with - 'Whore's chance in heaven' - not sure this is correct depending on your religion - something like 'snowballs chance in hell' would seem less something to stumble over - likewise 'life's a train with no stops' - is that really what they say?? I'd never heard it before. Overall though it did allow me to see the setting and how the story might progress.

i had a bit more problem with the art. I didn't dislike it but I also didn't think it was quite there yet as a finished article ready for public consumption. It's all pretty effective but the figure work looks kind of unnatural - lots of straight lines on human bodies where they shouldn't be - the chunky fingers and blank eyes felt like a bit of a cop-out to avoid doing the harder parts of the figure drawings that might throw the pictures out even more. It's adequate I'd say but not inspiring. Kuper got away with a very impressionistic style in his adaptation of 'The Jungle' and Eddie Campbell likewise adopted a style which left room for interpretation as it didn't have to always tell the story being told by Moore's prose. I think you are caught a little between a drawing style that is a little prosaic and a story which could be weighty and 'instructional' - they might not make for a great combination.

All in all I liked it for the ambition to do something which actually might connect with a market outside comics stores, and though I thought it was pretty good I wouldn't publish it in the form it's currently in.

thanks again for letting me see it.

all the best
cheers

Wow if all rejections where like that we may improve much much faster... well by all i could understand in those lines it looks like a cool feedback.

I hope it gives you more energy to be rejected like this.

I hope not have understood wrong it all

Talk is cheap. It's a very thoughtful long letter though. Since you mention gospel in the title it would follow that whores and other sinners have a pretty good chance at heaven; grace. Snowballs haven't much chance in either place. I didn't read rejection, I read develop it and get back to me.

I agree that it's nice he took the time to review, but he's really asking for everything to be changed. New look, new dialogue. To sum it up, he likes the IDEA of the book, the spirit in which the concept is approached, but not any of the book itself. development implies building from the basic foundation you've laid down, which in this case would mean finding or developing a new art style and redrawing chapter 1 to 3. I'm not going to do that for one publisher.

Peter Kuper's Jungle may be highly politicized but it certainly doesn't convey anything near the emotional and dramatic depth of Tug.