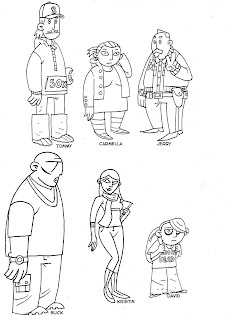 I've been bouncing two different book ideas around. One was another 30's era supernatural story involving athenian and african mythological figures and Robert Johnson. The other is a murder mystery in a rusty, snow covered, rural massachusetts town, where only a washed out ex-paper mill employee can figure out who done it. Above is some preliminary sketches for the murder mystery, which is the idea I'm going with.
The murder mystery story sounds bland compared to the Robert Johnson story, or compared to the book I'm working on. At the face of it the new book will seem in stark contrast to the new book because it's not overtly political, the plot is straight forward, there is a small cast of characters, and the style of the art is going to be far simpler than Tug is. In way this is the point. After working on Tug for almost two years I realized that some fundamentals were lacking in it that made Tug a strong book. I had started with the idea of making a comic in an older narrative tradition, specifically like the Brothers Karamazov, with many characters and subplots, as well as a lumbering and slow moving main plot. I thought it be refreshing because the books content and style would stand in contrast to prevailing expectations of graphic novels today.
It's been a big undertaking and I'm honestly a little burnt out on it. Also I often find it hard to properly maintain my skills as and artist/ writer while working on a project I'm emotionally and politically invested in. I think a basic issue among artist activists (not claiming to be an activist here.) is that quality is often shaky when trying to transmit an opinion through a piece. There's a kind of adage that relates to this that goes something like "never write (or draw) when your upset." This seems contradictory. It would seem that someone railing against injustice would want to maintain a feeling of outrage, I think however, that it is very hard to edit in a hyper emotional state. It's hard FOR ME to edit in an emotional state.
There's a point when I need to hit the RESTART button so I can get my bearings and re-sharpen my tools. I did this a couple times in school while working on my comic strip. I opt to work on none political work so I can easily stand back an rate myself on narrative and skill. So I figured the best way to recharge my batteries as well as continue to be productive is to start a new book (while continuing to edit the old one.) that would help me develop and strengthen basic comic narrative structure.
It's not going to be a fluff piece. The intention of the book is to deal with certain dynamics of race and power in a small town, but not as head on as in Tug Benson. I think it would be hard for me to make something apolitical.
I've had a long debate in my head about this and I'm still not totally sold on it. I am certain that the issues of forgotten history, labor, racism, and power are best served by artists and writers that can create top quality works and I don't feel like that is what I was making.
Anyway rant over. More to come.
BP
Posted by Ben Passmore at 2:43 PM

Hi Ben, The re-tired papermill man in my life has been Stanley Szwyd. Mill people are hard workers and sort of never re-tire. My little experience with factory work has been that one becomes very group oriented and task-oriented. In a mystery the strength of such a person might be in noticing things aren't as they've always been done. Also, that person is different. They respect authority, at least on the surface, and tend to be passive-aggressive and gossipy. That's my two cents, M.

I think Joe Hill rolls in his grave at the thought of factory workers respecting authority.