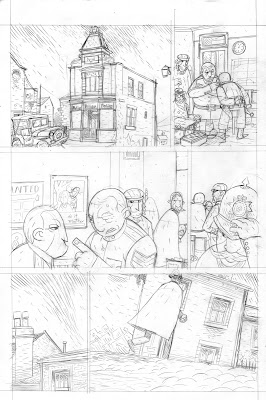 I'm in the chilly Berkshires again for my annual "this is why I live in the south" tour. Someone pointed out that most artists are crap blog writers, so I promise to up my game a bit. Failing that I promise to continue to keep it brief.
I got a review in a punk magazine recently that described DAYGLOAYHOLE as full of "bone-head violence." This was said several words after the critic compared me to Brian Lee O'Malley, which was confusing enough, but was a punk magazine critical of mindless violence? I don't think I understand punk rock anymore, aren't we supposed to be into smashing junk? It may be time for me to readdress my identity as a waning bitter scenester on the fringes of post-punk tomfoolery. Pardon me while I burn a kennel full of doe-eyed fawns in contemplation.
ANYHIZZLE, you'll be hearing more of me as I have nothing to do but scrawl in a dusky corner and update the blarg. Above is a penciled page from the Mid-Nite Hours mini-series.
Posted by Ben Passmore at 12:15 PM