Soz I don't have much to tell you, but it's been a while since I last posted some stuff so here it goes.

Heroes Con! It was a hoot. Kate and I slept on floors and in backyards, ran around back alleys, and even managed to fit the convention in. I meet Ken Dahl(aka Gabby Shulz) for the first time. I knew his work was sweet, but who knew he was such a nice guy? We talked to him for while trying to get him to visit us in NOLA, which is a hard sell due to the oppressive heat, a crime rate that leaves Juarez in the dust, and our biblical style disasters. Anyway, it's crazy awesome here and everyone should come before we're over run my mole people or lazer-eyed vampires or magma rain. I gave AD house one of my zines to consider, not holding my breath waiting for their call though. I also met Joseph Lampert, who is all types of badass. I foresee myself ripping him off in the near future. I also got to look at Guy Davis from over the steep sweaty humps of fan-boys and gals, no hope in getting to talk to him though, sigh. One day my prince will come.
Also I've been doing a short for B. Clay Moore of Hawaiian Dick and Battle Hymn, which has been going real well. Here's a tiny tiny sample of a panel. 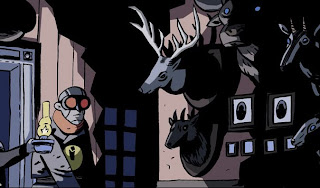 There's a lot going on here in NOLA around the spill. Like most disasters two groups emerge, those reacting to the spill as a single event and those reacting to the dynamics around the spill as well as the spill itself. I've taken this opportunity of sorts to apply my limited skills to a group comprised of activists reacting to the dynamics around the spill. New Orleans is scrappy and seems to ban together fairly easily (save for the handful of moneyed folks of course.). We've had one very successful event. I sense the world famous american indifference creeping in though. Our group is planning many other public participatory actions but I fear this won't be very well attended. The gulf fills up with black goo and people just want to go shopping, eat, and fuck in peace, business as usual. I don't know what's a harder fight, the abolishment of indifferent selfish government and companies or of indifferent selfish people.

Anyway, expect more fun stuff from Tug. I was thinking today that my book is comprised mostly of assholes in various forms. 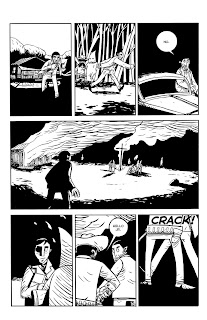 what a dick! If it's an conciliation most of these guys get what's coming. That's the "fiction" part of this historical fiction comic. ha!
Posted by Ben Passmore at 6:10 PM

Hi Ben, Well, I do think people "get what's coming" even if not publicly, or in a way obvious to all. The soul has to reap what it sows. Actions are seeds planted and in the fullness of time they bring forth whatever character abides in them. "Wages of sin is death." Mom