I read a reprinting Bukowski's letters to editors and friends during the 60s and 70s. He was crazy and brillant. Though I'm happy I'm not an old jaded drunk stooped over a rusty typewriter, I still wish my letters were as cool as his. Oh well.
I don't usually object to rejections from agents or publishers, mostly because I don't have that much time, but also because there's nothing more of putting that a pleading, tired, stress author. I broke my rule to respond to the last one I got. I've reprinted it here:
Thank you for your interest and you critique. I spend some much time drawing the book , it can be hard to look at it with fresh eyes.
I found your compliments really heartening.
Though I agree that D&Q and Fantagraphics would seem to be interested in this, they're not. I haven't had much luck with them.
I know Pantheon and Ballantine have put out books similar to mine in the past. My sense is that this book, because it's a little denser than many other Graphic Novels put out by alt publishers, will appeal more to book readers that have been recently turned onto graphic novels than veteran comic fans.
I know Memoirs are in vogue right now, but I think that many graphic novel readers are going to get tired of reading memoirs and are going to want something new and different. Persepolis turned a lot of folks onto comics who were unaware of the genre as an art form. I think these new readers are just jumping at what they know first and will move on.
I know you want to represent something that's a guaranteed sell and I want to make something that everybody's going to want to read, but I don't think this is only achieved by reproducing what's popular.
Once again thank you for your time, I know you must get mountains of submissions.
In the world of publishing this is a vengeful railing against the status quo.
Anyway, I think I pissed him off a little.
I've been racking my brain over this problem all yesterday. I had a lot of racking time while we were being an angry (but civil) crowd for the Treme tv show. It seems like folks would want good books, not books that are good in the same way. I try not to over state my skills, but really, a lot of these agents (not this guy, but most of the others I've talked to.) pedal total shlock. Wouldn't they like to put their name on a good book that doesn't sell a lot but that was worth a damn? Not that I think Tug is the next great american G.N. (not sure we've had a first.). Sorry, I'm ranting. How're you?
My month break from freelance is over after this weekend, which'll be nice in that I'll be looking forward to money. I will not be looking forward to gleaning through all the crazy folks for the one legit J.O.B.
Enough from me,
here's a cute hobo. 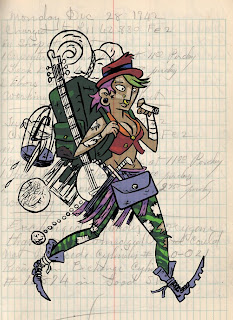 Americans in the 17th century capitalized Nouns when they wrote Letters. It has the effect of giving Emphasis where ones Voice would supply it in Conversation. Try writing a Letter to a Publisher that way. It could give you a dramatic Edge. The cute Hobo must be Kate; cute inner Tube purse. Mom