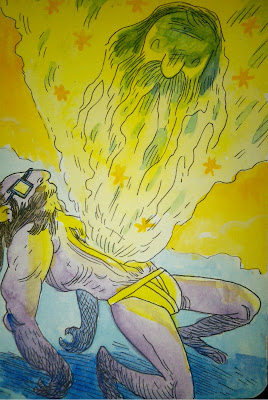 Not much to say this afternoon. I thought that it would be appropriate to start 2012, this year of the dragon, this year of apocalypse with a DAYGLOAYHOLE post. We all know it's coming and we may as well read comics and obsess about out heavy metal style end.
I've been playing with the illy portable water color set my girlfriend Kate gave me. There's a copy of some of Jean Giraud's comics rotting on my shelf and once and a while I pull it down and marvel at the crazy good coloring this guy pumped out. It might be nice, if I can muster the courage, to color the first official comic of DAYGLOAYHOLE in watercolor. We'll see....
I found this very nice review of DAYGLOAYHOLE: Movin on Up! by the folks at slingshot (Samara I think).
"When a porning oogle spills beer on his laptop, the computer morphs into an evil overlord that blows up half the world and enslaves most survivors. Out from the rubble marches a lone hero by the name of No Limitz: a katana-totting gutterpunk with a badass dog and his name tattooed to his forehead. No Limitz doesn't give a shit about saving the world--just about filling his belly--and perhaps it is his very lack of ideology that makes him immune to the evil computer's powers of enslavement. As No Limitz wanders the disseminated landscape in search of grub, he is forced to fight his way through roving bands of bloodthirsty cops, mutant scarbo 'rough bears, and various minions of the digital overlord. Created by the illustrator of the Raging Pelican, every page of this comic is statured with traveler jokes and hilarious details, inviting the reader to slow down and take it all in. I laughed my ass off at least five times while reading the fifteen pages--and I rarely laugh when I read. If you liked Brandon Graham's Multiple Warheads, you'll royally dig DAYGLOAYHOLE. (samara)"
Maybe I should put porning oogle on my bio from now on....
until next time folks remember, we're all going just pray it's not a lazer eyed polar bear.
Posted by Ben Passmore at 1:18 PM