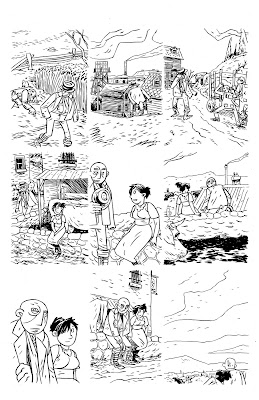 Here's the first Gospel Tug Benson anyone's seen in a while! So that's cool.
I just got back from a brief trek to NOLA for some filming for the movie The East, a strange indie romp into the tofu and gasoline soaked world of a radical anarchist cell. Actually I think it might be slightly more well considered than that... They just filmed for a couple hours ranting about the state and the church, stuffed me full of hummus, and threw me back on to a plane. So what insights do I have about this my first foray into film? Have my deeply overcompensating convictions about capitalism in entertainment been shaken after rubbing shoulders with film stars and directors? Have I traded my spotless image as a @ by playing one on the bug screen? Probably. To honest I vowed to auction my authenticity the moment I shook Ryan Gosling's hand just to be near him. No no no, I feel a little dirty about the whole thing and will likely donate all my earnings to the Raging Pelican in penance. Feel free to do the same.
Speaking of reaches at the real, I wrote a small article the latest Raging Pelican about the struggle of ARA and people of color in the NOLA occupy movement to get issues around housing, police brutality, prisons, education, and whatnot, heard by the rest of the occupiers.
A lot's happened in NOLA since I wrote the article. The population of homeless folks spiked in the camp, the city kicked the occupation out and then was forced to let them back, and the radical black community seems to be working with the occupation more and more. That last bit is particularly heartening, since an occupation in NOLA is nothing without the hard working folks of color in the city. ANYWAY, if you wanted to hear by bleeding liberal cries you would've just read the article.
"Hey Ben aren't you an cartoonist, why haven't we seen a comic in a hot minute?" you say.
Well the answer is that I'm up in New England, surfing the tundra on my drawing table and swaying to the sound of npr born world music and mom's schemes to infiltrate the catholic church so that I can bring you a bevy of completed shining tomes! We're nearly done with the first issue of The Midnite Hours, written by the really amazin B Clay Moore. I've been slaving away (SLAVING!) on a mini series written by Rory McConville called The Girl With A Black-hole For A Brain, pages of which I will post soon. For now you must continue to bear with my spotty communication with you all and in time I will come through! I guess.
Posted by Ben Passmore at 4:05 PM

I got hyped on caffeine, it makes me a wild typer.