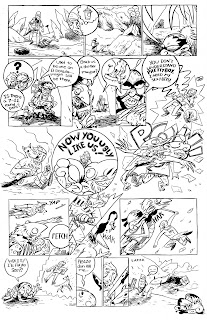 I've been reading this great book on the craft of making comics called Drawing Words and Writing Pictures. They have a really great section on one-page comics. I'm making a poster that'll fold-up to make a CD jacket, when it's unfolded it'll be this comic.
This is the first of hopefully a series of comics featuring an aged gutter-skunk in a post apocalyptic Gulf Coast, who scraps through mutants to get some hostess and spacebags.
It's really a tale about the human condition, if that condition is alcoholism and indifference.
More later.
Posted by Ben Passmore at 4:41 PM

WICKED. The world needs more of this.