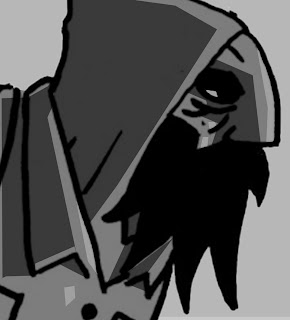 Slavan’s Fall
He had seen the grate numerous times on his way to work at the Broad Nation Delivery Service. Often on the long walk to work through the dense city streets his mind would move from considering the multitude of packages and parcels he was bound to deliver to the topography of the sidewalk he was walking on. Everyday as he turned the last corner next to the grand Broad Nation Delivery Service he enjoyed staring down the deep dark chasm under it’s metal threading. The grate itself was unusually large, taking up eight square feet of the dingy sidewalk and although one could see a ways down the hole was it clogged with thick, black pipes like sable tree trunks and was very dark. The hole eventually led to a subway platform, which he knew because every once and a while he could hear an automated female voice say, “The L train is now arriving,” and the clamoring of the train.
One day, as his feet clacked on the metal grate he heard a voice from under the grate say, “I need you.” It sounded just like the automated voice of the train platform, but it was filled with subtle emotion. It trickled meekly up to him from inside the dark hole. He wasn’t sure if his mind was playing tricks on him. He was so familiar with hearing the platforms voice everyday that it had blended into the noise of the city; that is until now. The voice spoke again, “ I need you. I love you.” He started to laugh out loud to himself. “That’s awfully personal for an automated machine” he said, “It must be some kind of gag.” He continued on his way to work.
On the very next day as he passed over the same large grate he heard her voice again. “I need you. I love you. I want you,” it said.
“Alright, that’s a fine joke, but you gotta know when to cut it off,” he said with a furrowed brow.
“I need you. I love you,” she cooed.
“I said that’s enough!” He screamed and stormed down the street.
Now you or I would not have paid this voice much more than mild curiosity. We certainly would not have devoted any strong emotions to it. But, he is not like us. He had no family or friends, not even a faithful pet. He was oppressively lonely. He had been so solitary for so long that he had forgotten what desire or companionship felt like. When the sputtering voice from under the grate admitted it’s tender feelings to him it cut through his thick layers of suppression and ripped him in two. A flood of long discarded emotions came back to him.
The next day he walked around the grate and onto the busy street where cars honked at him and screeched their tires. To his surprise he didn’t hear the voice. He paused and listened closely, but all he could here was the distant echo of people boarding the subway and of course, angry motorists. So he continued to walk to work.
For the next few days after that he walked around the grate and the voice did not call out to him. Occasionally, he would hear it say, “The L train is now arriving,” but nothing more. In a way he missed the voice, after all there was no one else to tell him they loved, or needed him. Some how he felt even more alone. This may be why he walked across the grate again. He stepped on it slowly, one step at a time and squinted into the dark hole. Suddenly he heard it, “I need you. I love you. I want you.” “yes,yes,yes,” he said and ran off.
Each day afterward he walked over the grate and when she spoke to him he would drop a little present down to her through the spaces in the metal threading. At first it was a little piece of candy. Then he dropped flowers down to her that he got from the florist on top of his apartment. He would talk to her as he slipped his presents to down the hole. He would say, “I need you. I love you. I want you.”
On a particularly rainy and lonely night he took a walk to see her. From a distance he saw a large white truck with orange lights. Construction workers had lifted the massive grate and were doing some work on the pipes. He felt as if pitiless strangers were invading his love, they would laugh at him if he tried to talk to her. When he tried to pass under the line of yellow tape surrounding the hole a massive hairy man in an orange hard hat stopped him.
“Sorry boss, we’re doing some work here. You’ll have to go around.”
His face grew hot. “But I don’t want to go around, I want to see her!”
The large man looked confused.
“Look nut, get lost,” the big man said.
He pushed the construction worker out of his way and ran toward the hole. Another worker emerged from the hole.
“Stay away from her,” the man screamed at him and pushed him aside.
The construction workers grabbed at his coat.
“It’s a forty foot drop you stupid bastard!”
He dove down into the deep hole and for a moment the air was cool and everything turned a soft, thick black, but suddenly the pipes grew thicker and he slammed head first into the tiny gap between them. He tried to squeeze through, but he only managed to get stuck upside down. The air was acrid and musty, his eyes burned and he couldn’t see. He wailed in pain,
“I need you. I love you. I want you!”
Posted by Ben Passmore at 2:56 PM